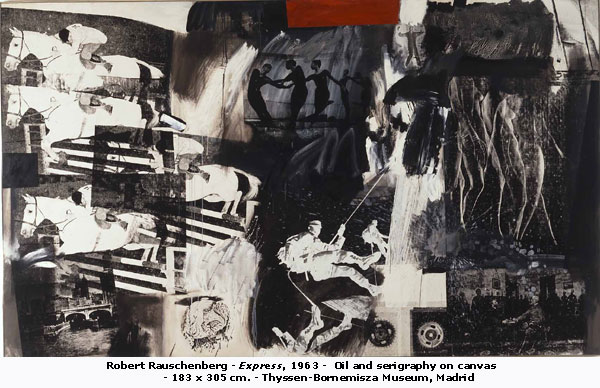 IN THIS grey scale canvas we see images surrounding the dancers of the Merce Cunningham Dance Company.

Images of what? Racehorses with jockeys; men rappelling down a cliff; some harmonious and beautiful naked bodies; something that looks like a an underwater creature or perhaps the human brain; a city on the water, with piers reaching out from the shores; and to the lower right, an end to war: Grant and Lee at the conclusion of the Civil War that rent the United States. E pluribus unum. In the equilibrium of the canvas, these disparate items are unified as the product  of an original mind. A singular mind.

You can see the images as an assemblage of unlike elements co-existing,  and you can see the dancers among them representing  beauty–and grace itself. Tilting at gravity, they embody the ability to fly through the air under one’s own power.

Or, you can see  the dancers apart–find them to be a beautiful refuge, as art can be, from the world and its various clamors. They draw your eye, and into the canvas you fall, and all the rest is left behind. Outside. You’re in here. Inside the painting, or inside the dance.

AT THE MUSÉE DU LUXEMBOURG
Paul Cézanne :The Bathers

MATISSE owned this painting for nearly forty years. You can stand, or walk about and look at it from different angles, perhaps kneel down to look up, as one might from a nearby chair: You can do this and you can see what Matisse saw. You can dwell where he dwelled, inside this painting, of which he wrote when donating it to the Musée des Beaux-Arts de la Ville de Paris:

In the thirty-seven years I have owned this canvas, I have come to know it quite well, though not entirely I hope: it has sustained me morally in the critical venture of my moments as an artist; I have drawn from it my faith and perseverance. ”  Henri Matisse

Severity, formality, an even-minded treatment of space; not a point of view but points of view within a single work; a breaking out of the frame; an ever more complex technique; endless variety within given limitations; the natural world as subject; freedom allied with rigor, structure, line, volume; an absence of anecdote– the work of art as its own subject. They established the ground on which those who follow would stand.

Merce Cunningham on dancing: “It’s what’s interested me all my life.”

AT THE THÉÂTRE DE LA VILLE

TONIGHT at 8:30 p.m., the curtain will go up on the Merce Cunningham Dance Company for the last time. Next week, they will close their fantastic run (since 1953) with a series of performances in the vast space of the Park Avenue Armory in New York City, but here, tonight, is the last of the repertory performances.

I have been looking at–and living inside–this work for just about the same number of years in which Matisse looked at his painting by Cézanne. The very first dance I saw is the one in the photograph above. Then I went back to my proper girls school in New Jersey, to a world of drab gym uniforms, Latin class, and an honor code that encouraged snitching.

In the years to come, I would enter and re-enter this world in the theater–this world of Merce Cunningham–and  visit and re-visit it in my mind. And go back. To the theater, to the thinking. If it rained into a lake, it reminded me of Merce.

In the years since that first encounter with the champagne that was “How To,” I have met most of that cast–Carolyn Brown, Sandra Neels, Gus Solomons, Valda Setterfield. And the casts that came after. The storytellers, too: John Cage, David Vaughan.
What an amazement…!

And for the last four years I have had the adventure of watching the company at work, and capturing what I could of them–and of Merce himself–on film. That has been wonderful. But it is, it was, that work itself that filled up my eyes, gave my mind something to occupy it, to wander in.

What a luxury it has been, to live inside that art. And what a necessity. A refuge for the mind. A place to dwell amidst the traffic of the ways.I can’t imagine what my life would have been without it. Or how it would have been….

Once, in a raucously decorated salon behind the stage at the Palais Garnier, the composer-musician David Tudor introduced me to Teeny Duchamp, Marcel’s widow.  What’s to say about that, to have passed through the work and back into life–that life?

It’s been raining in Paris the whole time I’ve been here. Rain, tears, what’s the difference?

Special thanks to James Klosty